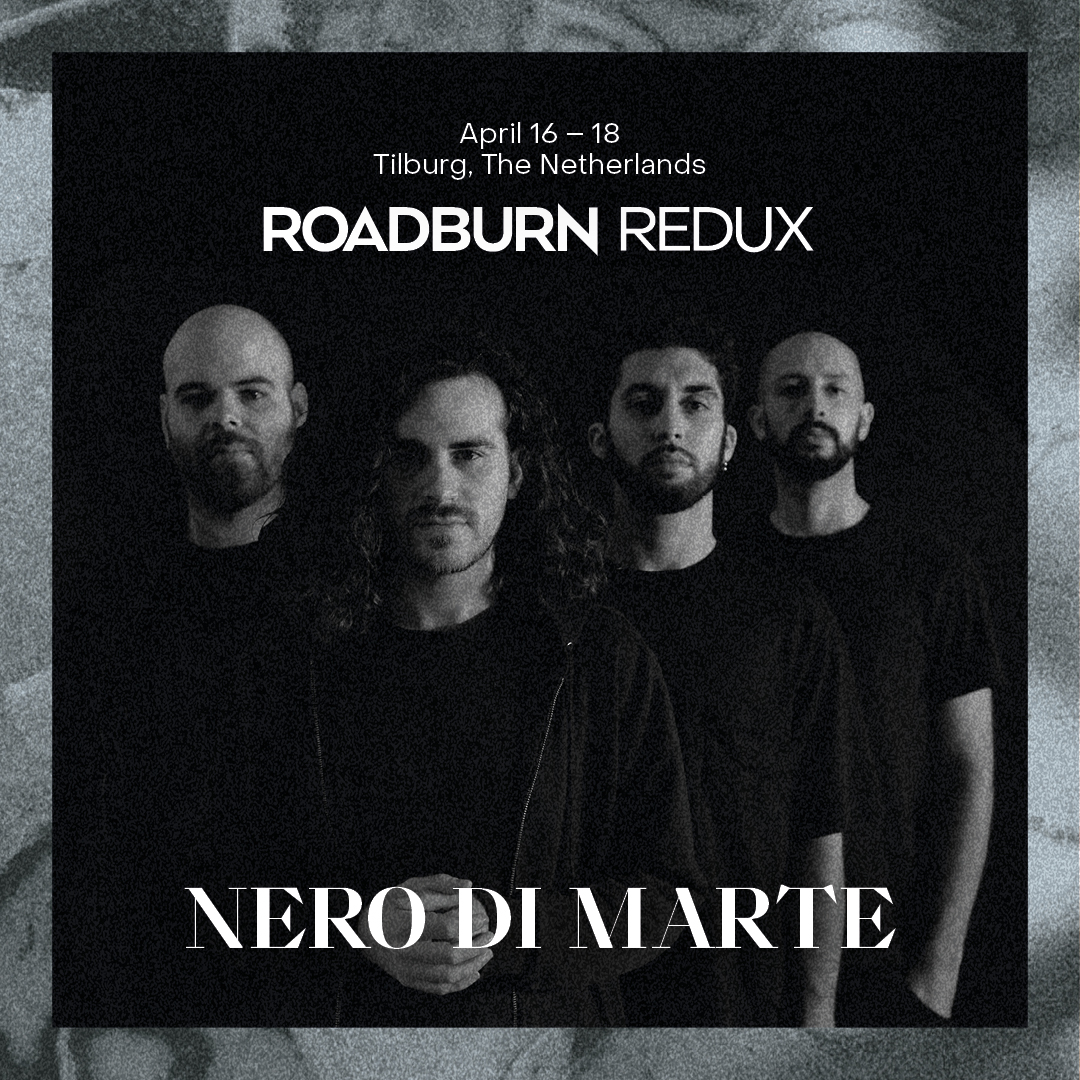 We are excited (and very honored) to present the band’s new lineup, performing songs from Immoto, at the Roadburn Festival online event in April 2021. Please visit www.roadburn.com for more information on the event.

Francesco and Andrea have decided to step down from having an active musical role within Nero di Marte. Their reasoning and decisions have been long thought out and were not driven by either conflict or creative divergences, but rather by different priorities in their life. Both of course continue to be our best friends and we have all expressed our desire to collaborate in creating more music for Nero together, in some form, when the time is right.

It’s impossible to put into words what these years together have been like. On a personal note, I (Sean) feel lucky to have met them by chance through our common musical sensibilities, but the relationship we have is one of the most meaningful in my life.

However, the present and future of the band is bright and erupting with creativity. As we moved our headquarters from Bologna to Rome last year, we’ve had the opportunity to add two incredibly talented, creative, thoughtful people to the project. Alessio Cattaneo (Onryo) and Giorgio Figà Talamanca (HateLimbs) joined the band during the course of 2020, both having an exceptionally deep understanding of the band’s music, bringing much welcomed new ideas and energy to the fold, propelling the band in very promising new territories… Please look very much forward to it.

The new lineup is as follows:

And now, a few words from both Francesco and Andrea.

“As some of you may have noticed from the band’s latest shows and videos, I am no longer musically active in Nero di Marte.

The reasons for this decision are probably too long and boring to be transcribed here. What is certain is that it wasn’t easy to step out of a project in which you have heavily contributed for more than a decade, but it was done with the assurance that other people will continue to keep it going and that there will always be room in the future to make new music together. Music still has the same importance to me as it has always had, it is a daily desire and necessity, but now only within my own personal sphere and without any audience.

I think that this project over the years has acquired a musical identity that in part can transcend the people who are a part of it. It’s an aura, a pathos, something that is difficult to define, yet fully evident when encountered. There is still a lot of music to explore, refine and transform with newcomers Alessio and Giorgio: I know that there will be something of mine even in albums that I will not write, and will also have the privilege of listening to them with the same enthusiasm of someone listening to his favorite band.”

“It’s been a few months already since I made the painful decision to no longer be active in Nero di Marte. Without dwelling too much on the reasons for this decision (none of which were driven by conflict), I felt that it was best if my role was filled by someone who can immerse themselves in doing this type of music in full harmony with themselves and with others, as well as with the right intention and desire to experiment.

These last ten years have been, musically speaking, the most extreme, beautiful, demanding journey I have ever shared with other people: a slice of life that transcends the musical notes we’ve created together. A privilege I can only express through my sincere thanks to the people involved. Samu, Sean, Francesco, Giulio. Each of them made possible a certain way of interpreting and creating music, with both a playfulness in their approach towards their instrument and the gravitas of bringing concrete ideas to fruition.

Perhaps the future will give us the opportunity to share much more together – this project has always been about a precise musical intention rather than simply its creation. Only time will tell. Certain connections and relationships never cease to exist. During this musical process of sharing and evolving my life has changed and become more positive just because of being a part of it.

I also want to give my best wishes to Alessio and Giorgio, as I anxiously wait to hear what will come out of this new chapter for the band!”

This is the last dance

Long I have spun

This is the last dance

I do not push

To skies of black

We are an ark going adrift

The promise of an exile with no arrival

A singularity in the void

We are a sextant

Here, in the shadows

I aspire beyond life

I no longer want to

Here, in the shadows

I leave all that I know

and free my clenching hands

The known will neither sink nor fly

There is nothing else left within me

It is a hymn for abandoned meanings

It is a hymn for the unfulfilled within me

I am not removed from myself

There is nothing left here

It isn’t form that I am searching for

I am not removed from myself any longer

We will never know

You can try but

You will never fill

If you search for me

I will do the same

Until in our gestures there will be…

Until in our eyes

you will see nothing but a reflection

We will never know

in the curve of your lips

Every shadow stretches out

through many dawnless sunsets

Each step is a note

in the melody that accompanies us

And so you’ve appeared

in the house where every measure is inverted

The cracks dance in a circle

on the slanted floor of time

And so I disappear

where I am united in the senses

to gold and black

To red and the darkest blue

The horizon unfolds and transfigures

In the melody that accompanies us

and returns to you.

The slumbering lines, curves and edges

awake in freedom from the unknown

Forgive those who do not want to know or see

To these few, give them something to believe

Give amends to the insincere

in this temple we’ve built

where all gleams are bent

You give, it takes

It gives, you take

in dances which are changing

The nature of the moment

Fly above the surface of a substance

that is extinguished and unmoving

It makes its way like a cloud, unexpected
when everything around is serene

What if, in its dark hues,
everything that was patiently ordered
collapsed with a crash
If everything ended here…

If the dreamed, the constructed
The past, the only hoped-for,
The achieved, the unfulfilled
If everything ended here

Search all that has gone
Find meaning for never remembering
Clouded by fear, clouded by nothingness
Distant sounds allure me, a hymn to follow
I find you there at its origin

But the mist will never leave

This isn’t what you wanted

Eyes hollowed in memory
one closed – one lifeless.

Eyes path to your disguise
one shivers – one far away.

Eyes as the nights ends
one recognizes – one turns away-

Eyes as our time here ends
one sneers – one opens.

You’ve returned
The eyes of Dis are mine

We are deluded insignificance,
With empty thoughts and empty faces
We are fixated on our invention
And erect imperial walls of design

I wonder these rules, meanings, races
Just structures for all places
Sheltered from these hailing stones
We are rulers of a world that is not our own

I am the animal
I am reborn

The flood will never cease

Was it ever there?

Are we not those who leave?

Can’t we be afraid?

This is the end
Plans unfold
And everything converges
All converges

Deformed and remoulded
A veiled conviction for all to see
Give it a name, leave it behind
Break them and then bring them back to life

You can’t stop
When all converges

Close your eyes, take a step forward
Sink in the abyss with us

In the art of falling forever

Replaced
Feel it weighing down
It comes to pass
So it waits
It rests, unprepared
Hidden to the numb, from itself
Until time dissolves

Lost all emotion
Feel it inside, its emptiness
This isn’t fear
Just immense cold nothing

This is what we want

Flood, wash everything away
So we can be dry to the bone

Lost all emotion
This isn’t fear
Just immense cold nothing

We surrender ourselves, once again
To this dissonant vibration

Where does the sea start and where does it end?
Every wave breaks, draws back, creates a new line

Pick up a stone and cast it
How far is it from the shore?
Between today and tomorrow
there will always be a difference

The ocean brought back shreds of what I had cast
Dirty with sand and salt, encrusted and refined

Welcome to my architecture
Held by fear

Locked forever
in a prison you plead me to build

Watch
You can’t see
Blind is your belief

(written and performed by Void of Sleep)

A life caged by the sickness
And a lesson never learned
It’s a prison of the mind,
While your bones writhing in pain

Nailed to the cross
Exposed and humiliated

Violated in his soul
Deprived of dignity

Blank eyes, hollow brain
A man with no way out

Facing the fear and your disease,
There is no one who can help you

Trying to survive at the voices,
There is no one who can save you